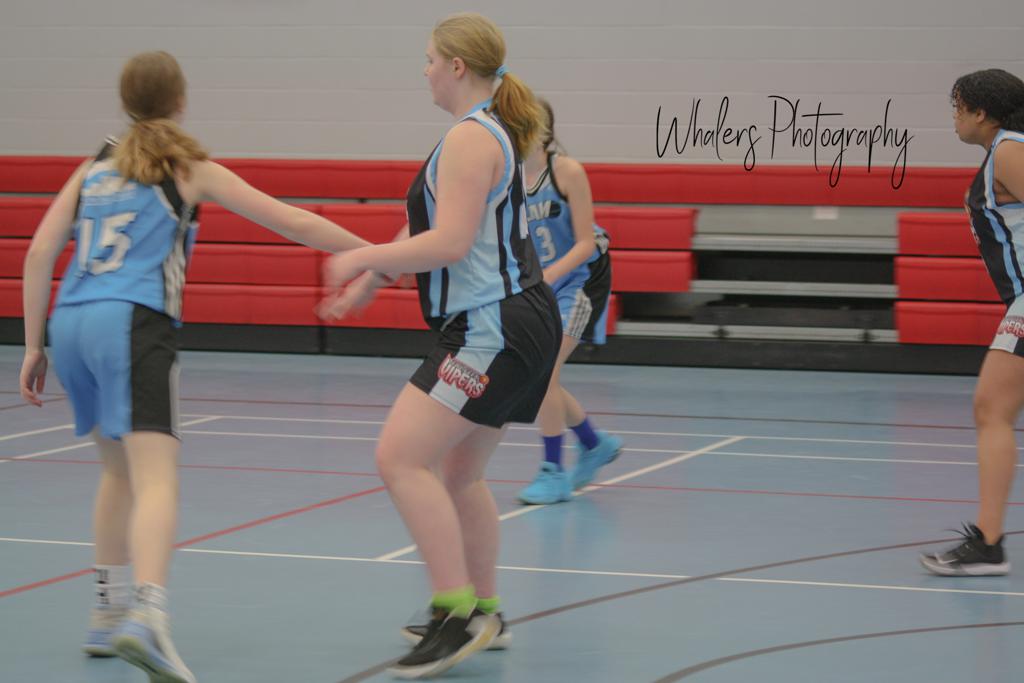 The Tri City Vipers Basketball Club's  Recreational League is for girls and boys 7 to 18 years of age.

Our Recreational League focus is on inspiring a love for the game and in having fun on the court, while developing player skills.

The Recreational season starts mid-October and runs until mid- April .  We welcome players from beginner to advanced in all divisions of our recreational league program.

Recreational league also offers a Selects program as a further development opportunity for the top house league players.  The Selects program also acts as a bridging program to our competitive stream (Vipers Rep).

All recreational league players will receive a backpack, water bottle,  and a basketball to keep (uniforms must be purchased separately for an additional fee).

In a regular season, players can expect to attend initial divisional sort outs in late September - early October.  Through October, players will play some weekend exhibition games as part of the team balancing process and may attend additional sort out sessions.  Exhibition games are also used as coach training and junior referee training opportunities.  Players may play with different groupings/teams throughout October.  Once coaches feel teams are balanced, final rosters will be made available (sometime in October).  Tri City Vipers Basketball  reserves the right to move players between teams during this period and in the week following the first official game of the league in order to improve team balancing; a player may not refuse any trades between teams.  Teams will have at least 1 practice with their final roster before their first games.

The Tri City Vipers participate in the Metro Basketball Association ("MBA or MBAns") which brings together area associations from across the city and outlying areas to have fun, develop sportsmanship and compete against each other in a positive setting.

If you have any questions regarding our Rec League, please check the FAQ below and also feel free to contact us.

REGISTER NOW BY CLICKING THE LINK BELOW

1. How do I know which division to register for?
During online registration, you will automatically be presented with your eligible division based on birthdate and gender as input in Step 1 (or as already saved in your player profile for returning players).

2. When will I know which night my practice will be?
players will attend sort outs for their respective divisions. This process is used to create balanced teams and assign coaches to teams. Once this is complete, the schedule will be created and practice times will be assigned to each team. Teams will have one practice per week that will run for either 1 hour or 1.5 hours, depending on the age division. In addition, each team will play one game per week on weekends. The locations for all of these will be provided well in advance to help with your planning.

3. My child is involved in multiple sports, how can I make sure that there are no conflicts?
The basketball season runs for many months. Conflicts will occur. However, during registration, you will be able to indicate 2 evenings that you are not available. This information will be used during the team creation and scheduling process to help prevent your conflicts.  Your unavailable evenings will be confirmed during the sort out process as we realize this may change from time of registration in the Summer.  Tri City Vipers  will do its best to place players on teams that do not practice on the evenings indicated as unavailable.  Once teams are formed we cannot accommodate changes to rosters based on availability changes or friend requests.  First and foremost, Tri City Vipers strives to form balanced teams to ensure a positive learning experience for all of our players.
Tri City Vipers Basketball Club asks that players only register and take a spot if they will be able to attend a majority of events.  As basketball is a team sport, the ability of others to learn, develop and have fun is greatly impacted if only half a team regularly shows up to events.

4. When my child does have a conflict, will this be OK?
A certain level of attendance is expected so as to not leave your team short players for games - as this impacts the experience for all of your teammates and your opponents as well.  We do recognize that the season is long, and some conflicts or illness can occur.  Please ensure you always advise your team's coach when these conflicts arise so that they know in advance that you will not be there. Similarly, in order for your coach to plan the best practice possible for your team, please advise them if you are going to miss a practice.
Tri City Vipers Basketball Club asks that players only register and take a spot if they will be able to attend a majority of events.  As basketball is a team sport, the ability of others to learn, develop and have fun is greatly impacted if only half a team regularly shows up to events.

5. Does Tri City Vipers accept friend requests?
We recognize that it is fun for players to play with their friends, but for the good of all of our members, our goal is to ensure that all players are provided the best possible means for a positive experience, which comes from running a league with balanced teams.  This lends itself to an environment where all players can develop skills and enjoy good competition in games.  Sports offer a great way to make new friends, and players would not benefit from this if they only played with those they already know.

Please keep in mind that our coordinators put a lot of time and consideration into forming balanced teams within the constraints of player availability and it is not an easy task.    The task becomes impossible when there are multiple special requests, so Tri City Vipers makes no guarantee that any special requests (ie. coach, multiple friends, location) can be granted.

Our Jr. Mini coordinator will only will consider friend requests for new players that may be apprehensive to try the sport.  You may contact your Rec League coordinator if these circumstances apply to your player.

Our coordinators will work together to ensure siblings are provided practice schedules that are coordinating and work for their family schedule.

6. I have a background in basketball and would like to help coach, who do I contact for this?
Tri City Vipers Basketball Club is always looking for volunteers to help run our rec league program. This includes coaches, assistant coaches, and other administrative functions. No prior experience is necessary for the majority of the roles. Please indicate your desire to help during the registration process. There is an option to indicate you are available to help out.  You may also contact our Administrator to express your interest!

7. What caliber of coaches will coach my child's rec league team?
While all of our rec league coaches are volunteers, they do have prior basketball and/or coaching experience and a current police record check.  Tri City Vipers Basketball Club offers training opportunities to all of our coaches and provides resources to aid coaches in planning age-appropriate practices.  Some of our NCCP certified coaches also lend a hand to help our rec league coaches gain further coaching skills.  Help and support is always available!

8.  How much playing time will my child be given during house league games?
In rec league, all players in attendance on the roster will play equal time.

10. In Step 2 of the player registration, I have more than one option I can register for.  How do I know what to choose?
There are a couple of reasons why this may happen.

If your player is born in 2013 and you are registering for the 2020-2021 season, they may choose between our Mighty Mites program or our Jr. Mini rec league program.  Only those players with experience (ie. a season of Mighty Mites completed) should choose the Jr. Mini rec house league program.  In some cases, athletic children who have played other sports such as soccer or hockey are able to transition to Jr. Mini rec league without having completed a Mighty Mites session.  If your player is new to basketball (and new to sports), they will likely prefer our Mighty Mites program to learn the basics of the game and begin to develop an understanding of the game.  This helps to then transition the player to rec league play next season, having provided the player some time to develop some confidence.  If you are unsure, please check in with us for a recommendation.  You can contact our Coordinator of Entry Level Programs, Coordinator Boys Rec League, or Coordinator  of Girls Rec League, as needed.

You must also ensure you choose either Recreational League or competitive Viper REP.  Vipers REP is the competitive branch of Tri City Vipers Basketball Club.
Note: only those players who have tried out and are named to a roster by evaluating coaches can register for Vipers REP teams.

11. My child wishes to try out for an Vipers REP team, but I'm worried if not named to a roster there may not be a space in rec league at that time, what should I do?
You may register for rece league over the Summer to guarantee your child a spot should they not be named to an Vipers REP roster after tryouts in August/September.  If your player does successfully get named to an Vipers REP roster, you will simply register for a top up to Viper REP registration and will pay the difference in registration fee at that time.  Our Administrator will then transfer your player from rec league to their Vipers REP team.

12. I still have other questions?  Who may I direct them to?
Please feel free to contact our Administrator, who can assist or appropriately direct you to the representative who can best address your question.